HIS SEVERE COUGHING...
attracted my attention.  Mrs. Hance was still talking to another patient, so I slipped behind the curtain to his part of the hospital room.

It was hard to tell his age, for the marks of sickness had scarred his appearance.

“Do you know Jesus?” I quietly asked.  The only reply was a solemn look from eyes that were expressing inner hopelessness.  I learned that he was dying of cancer.

I wanted to reach him, but what could I say?  A feeling of helplessness overwhelmed me.  Then, coming to my rescue, the Holy Spirit whispered so sweetly, “I am with you.”

Suddenly the man’s eyes were filled with tears. The Holy Spirit was indeed at work.  I hastened to tell him of the love of God, and of Jesus who died for his sins, and of heaven, which he could gain.  I sensed my words being directed by the Spirit.

When I would have asked him to surrender to the Lord, my faith waned.  My human reasoning said, “He’s not ready; you didn’t reach him,” and I yielded to my doubts.  I stood and was going to leave.  Unknown to me, the angels in heaven were getting ready to rejoice!

One last weak strain of faith rose up inside me.  I took his hand in mine, lingering for some possible miracle to take place.  I told him I would be praying for him.

Then my heart almost leaped for joy when I detected a slight evidence of having reached his soul.  He squeezed my hand and would not let go.  Quickly I seized the opportunity.

“Will you let Jesus come into your heart and save you now?”

With a weak and frail voice, he whispered a victorious, “Yes!”  The hospital bed became a sacred altar, and a soul was born into the kingdom of God.  The angels and I rejoiced together!

A week later I went to see him again, but I was sent away.  He had died the day before.  How glad I was to know that when he passed on to eternity, he had a home with Jesus. 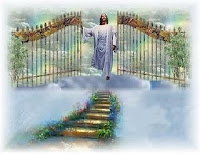 ‘Then I thought, “What if I had left him too soon?

What if I had not waited for God to work?”